White's Illusion and Importance of Context in Testing and for Testers

I found one of the best examples or illustration of what is context and why it is important - in Keith Klain's Eurostar Webinar "The confidence Game: What is mission of Testing" 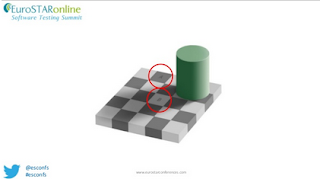 As Keith explains (slide #7) white's illusion- we can see how our brains and eyes perceive color in the context of surrounding's color and relative sharpness or dullness. To me, this is similar to the idea of "context" of say our projects, testing practices and probably everything that we believe as truth. To be context driven (in testing) is to be aware of "background" of statements, ideas presented in all aspects of testing. Conversely, context independent approach would be to "completely" ignore the background of the statements, views and ideas presented and treat them as absolute and universally applicable. Personally, when I was growing up as software testing professional - I did the mistake of taking everything I read or hear about software testing from books, blogs and conferences - as absolute knowledge about testing as they came from "experts", authors of books on testing, consultants and folks that have great reputation in the industry. After getting into Context driven world of testing and initial training  - I started understanding the importance of context. Then I figured about how background or context colors every information so differently and how not to be fooled by power of presentation of views/ideas that come in context independent way.

Another extension of white's illusion and importance of context is straight relates to enemy #1 of rational thinking - "confirmation bias". In simple words - its tendency towards supporting and endorsing something that you (already) believe it to be true while rejecting or ignoring any contrary evidence. Since our childhood - we keep accepting pieces of "information" as knowledge and store them in our brain (tabula rasa as John Locke suggested). We probably start of with an empty slate (not sure if brain of the fetus in mother's womb has something written on it) and go on accumulating so called knowledge through our senses/experience. Once the brain accumulates a "critical mass" (probably when kids start going to school where they are asked to simply follow the rules or memorize what teacher says) - confirmation bias starts kicking in. Brain starts filtering all information that does not confirm current (at any given point of time) information "saved" on the brain slate.

Just as our eyes perceive color in the context of surrounding, our so-called knowledge is relative to stuff that we already reckon to be true. This illusion of absolute knowledge is similar to white's illusion. Fortunately, we know that something of this sort (filtration to confirm to known stuff) is going and we as testers as rational thinkers need to be vigilant about confidence of what we know to be true. One way that I have been practicing to beat confirmation bias is to hang around with people, read and listen to ideas that contradict my existing set of beliefs about say - testing, software, management, money matters and almost anything that impacts me.

There is a huge knowledge base and psychological research on "confirmation" - My favorite one is from David McRaney the author of "You Are Not So Smart" - "People like to be told what they already know. Remember that. They get uncomfortable when you tell them new things."

Back to Keith - thanks for note on white's illusion and the rest of presentation about "mission of testing" - I really enjoyed listening to it. In my opinion - key message of Keith's talk about is "dangers" of seeking confidence. What danger - if you seek confidence - you will get it - an illusionary one though. There is an entire machinery and system called "Marketing" to serve you exactly the confidence you are seeking - which is "cooked" with recipe that swear by.

If you are a stakeholder  - be wary of any consultant or project manager or any one serving when they claim they can "generate" confidence by doing "xyz" (or whatever).

"We never are RIGHT we can only be sure we are WRONG" - Richard Feynman (quoted in Keith's presentation). I love to quote Feynman and tend to agree with him almost on all things that he said.
Need to check If I am falling into confirmations bias with respect to my fascination with Feynman and his approach of knowing.