Two versions of being practical...

My boss tells me always that my ideas about testing are impractical and esoteric. I find it hard to understand why he thinks so. I believe my testing and automation ideas are as practical as one can get because I can demonstrate the practicality of the ideas by "doing" testing or automation. I suppose being practical - should be mean "demonstrable". I can show how my ideas of testing can be and are practical. Boss is not impressed.
Probably, my boss has another version of practicality. It goes something like this. Regardless of what subject matter or technicality of testing as it is practiced in real time - there is a social, political, business side to it. Many things that testing practitioner believes to be true are not possible in real world due to political and non technical aspects around testing. Under such situations - being practical means changing your testing philosophy and approach to suite the context of the testing world. Harsh word for such adaptability could be "compromise". If you are surprised or questioned instances like stakeholder seeking quick benefits of automation (something that reduces cost of testing), counting bugs, counting requirements, using bug metrics to measure testers, expecting testers to find all bugs, doing 100% testing - you probably are practical in another sense.
Living with many irrational notions about testing and trying to do what is possible, taking the world as it comes without challenging it or fighting the problems is the version of practicality - probably my boss believes.
Both of us could be right or wrong. How do I know?
This reminds of me of a Jerry Weinberg's saying (para phrase) - "Instead of calling something as irrational or illogical - consider it as rational or logical from another perspective or set of values".
You would like to call "testing" as an engineering pursuit? Wrong... it is becoming (it was from the beginning but now it is showing up more clearly) more social. Testing works in social systems and is affected by cultural, emotional, economical issues.
Time to start studying economics, social science to reason behavior of people in testing context. It is not rational at all times....
Shrini
Posted by Shrini Kulkarni at 4:28 PM 2 comments:

What type of tester are you?

I was assisting homework of my 7 yr old daughter in her science assignment. The assignment was to collect pictures of living and non-living things and make a collage. I thought about how one could approach this work and have fun while doing it. Being a tester, it is hard not to see connection in a work like this. Here is what I thought….

Let us say two testers “A” and “B” are given this homework assignment of creating collage of living and non living things.

Tester B: While thinking about traditional ways of looking at living and non living things, this tester also questions his own understanding and meaning of “living” and “non living”. He looks around, reads, discusses with colleagues about these things. He, then ends up with a broader list and accompanying narration.

Today’s testing industry promotes type A testing mentality. Type A testers eventually will become “commodity” (with price tag 20 Dollars per hour – can execute 30 test cases per hour etc). I am not sure that is a good thing or not. If you are a manager or someone who manages testing as business – you would probably have (or would like to have) more of Type A testers as such people are plenty. Simply, take truck load of freshers from college, run them through 15 days of training on testing vocabulary, make them memorize some domain stuff (banking, insurance, telecom etc) , teach QTP – there you go an army of (Type A) testers ready for deployment (hence billing).

If you are a tester looking at long term fulfilling career – you would want to take path B – practice to do things differently, challenging status-quo, thinking broadly about the problem and its context etc. To become “Type B” tester you need practice – practice of doing testing (weekend testing is an excellent platform or training ground). I am afraid there is no shortcut here – no 15 day testing courses to get there.

There is a catch here… Type B testers are mostly rebels and free thinkers and often want break status quo, create new paths, explore new territories. Much of our industry is not very nice with such folks. Very few can tolerate “ever questioning”, skeptical and rebellious tester in the team. In a control freak, military kind of set up where key focus of the job is to “follow instructions” or “getting job done” – Type B testers get frustrated. Some get converted into Type A or leave the organization. Sad situation but true in many cases. I hope that one day either rebel testers will learn to live harmoniously in a hostile, confirmatory environment or industry recognizes the value of these “problematic” folks and make space for them.

“Testers are like lighthouses at sea shores, headlights of an automobile” says James Bach (paraphrase). Good testers, apart from completing the task given to them, engage in parallel about “meta” things for better and deeper learning. That is a good thing (can I say for testers not for folks who manage testing as a business?).

Did someone say “Type C” tester?

What does that mean? 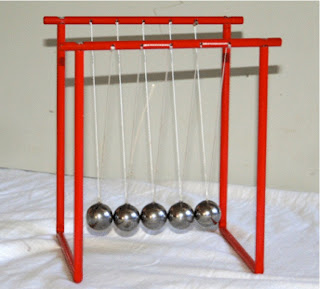 The other day I visited a science exhibition at my daughter’s school. As I was passing through an array of models and demonstrations, I could see every student was enthusiastically trying to draw every visitor's attention to his/her piece of work. Everything sounded good except one thing - the students were seen literally reading some sort of script to explain their work. Some smart guys memorized the stuff well so they did not require any hand written (mostly) note to assist them delivering the script but many did keep one by their side

. It was hard to find someone who “knows” what he/she is trying to explain rather than forcing the stuff through using pale dialogue delivery.

There at the corner, a bright spectacles boy waved his hand calling me to see his work. I walked up to him. He was demonstrating “law of conservation of momentum” through a model that roughly looked like the one above.

After a customary greeting, he read through his memorized statements about law and looked at me with hopeful eyes asking if I understood anything out of it.

I asked him “what does this law tell you”.

He promptly, this time with more energy and desperately attempting to sound confident, repeated the law (the statements) like a tape recorder.

What do you understand from the term “momentum”, I asked him.

He was totally unprepared for the question (missing in his notes - missing test case?)

I know that is a mathematical formula for momentum.

Student finally found something that I agree with him and said “Yes. you are right sir”.

At that instant, I remember my hero Richard P Feynman - the (most) curious character and asked him “But what does that mean? Mass times velocity?”

This time, student was not expecting that question at all.

I moved to another demonstration where they were showing double helix model of DNA and the girl explaining the model, gave a 5 minute non stop explanation of what DNA is and what genes are.

Again, some question “What does that mean” to the explanation “genes carry genetic code so that characteristics are passed on from species to species” got everything to a grinding halt.

I became pretty notorious from that day in among my daughter's friends about asking such silly questions about things that are taken for granted for the students. My daughter later told me that her friends were impressed with my “latest” knowledge of science and my questions.

Later, over the week end, one the students (harassed by me in the exhibition) paid a visit to my home apparently (I thought) to take revenge on me. He, incidentally was my daughters classmate and asked me “what do I do for living”. I said to him “I am a software tester”. While he did not understand that very much, he wanted to know how learn things. I explained him about few things that I learned of late as a student of software testing (than when I really a student to learn science). He appeared to have understood some of my approaches.

When he was about to leave, I gave this book “ Surely You're joking Mr Feynman” and told him - "learn science like this guy". I was happy that I introduced Feynman to a student hoping the “Feynmanism” spreads in the school.